We shot down the Connecticut River and into the Sound in a fraction of the time it took to go up except for the momentary pause at Old Lyme Drawbridge. In a sailboat or any slower vessel, current and wind make all the difference in the world. The weather as expected was a cloudy misty spritz. We motor-sailed to Port Jefferson with about 6kts of apparent wind on the stern. The genoa out as a crutch to the iron genny.

Granted it was crappy weather but rarely do I encounter many boats on the sound except right by harbors and when it’s sunny. In between is usually quite peaceful which is partially why I began sailing in NY. Flying back into NYC from a trip out of town was usually a not-so-comforting feeling. From the air the only areas where peace seemed to reside was in the empty waterways. So that’s where I went. 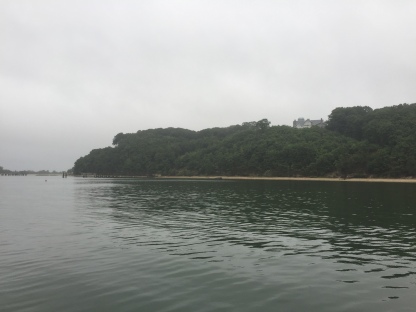 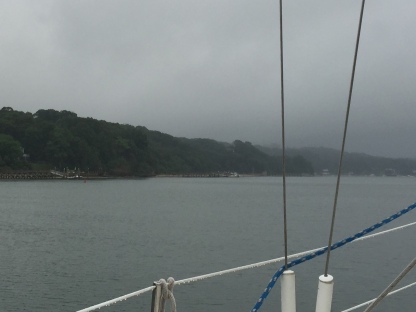 I’ve heard Port Jefferson was not a very cruiser friendly town but for us it was perfect. We didn’t take the dinghy in but the cool thing is that you can pretty much anchor anywhere as long as you’re out of the main channel which guides the huge ferries back and forth to Bridgeport Ct. We found a cozy spot in the lee of some lush cliffs and settled in for movie night and chicken tacos. Some swans floated over to join us and soon after an Osprey landed on the spreaders and sang us a song.

By the next morning the mist made way and sunshine would see us back home to Port Washington. Sans wind.

Laura spotted a balloon that she had seen all the way back in the Block Island Sound! Without haste she grabbed the boat hook and went to work.

A set of numbers we had spotted many miles away with some hitchhikers. 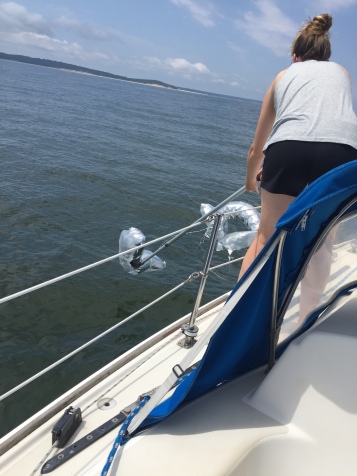 A set of numbers we had spotted many miles away with some hitchhikers.

As she brought the still inflated balloons on board she screamed, “there’s thousands of spiders all over the boat!” The balloons quickly went back overboard. The thousands of spiders that scurried across the deck were indeed thousands of tiny crabs. These balloons were a habitat for burgeoning crabs and who were we to deprive them of their home? In fact most of the crabs perished shortly after being on the boat. Sadface.

The rest of the day was beautiful and flat calm which helps the 13hp Yanmar push 10,000lb Celeste through the water. Perfect for reading and studying the currents for the next voyage.